My name is Eric and for over 36 years I am the happy owner of a Mazda Rx-7.

Because I am a nerdy type who likes things that are a bit out of the ordinary: running Linux on my desktop (for over 25 years now); making scale models and action figures; red haired girls; so why not a rotary powered sports car ?

Why an Rx-7 FB instead of a later model ?

Honestly: because it matches my level of competence best (fast enough to be fun, not fast enough to turn driver stupidities into major accidents).
But also because:

Although I prefer driving my own Rx-7, I have driven all of the other RX-7 models as well.
A normally aspirated FC is just heavier and has a noticably lower power-weight ratio (135hp at over 1300kg vs 115hp at 1040kg), a Turbo][ is heavier still but at least it has a lot more power, but was also seriously expensive (overhere in 1988 a Turbo][ cost four times as much as an Rx-7 SA did in 1979).
For me a major downside to the FC is that its wonderful roadholding relies on pre-loaded rubber bushes in the KM toe-control hubs in the rear suspension. Properties of rubber will change over time, so by now there is no FC left that will perform as well as a new one once did (Mazda stopped producing replacement bushes long ago and new-old-stock is no option either).
I'd rather have a car with less stellar roadholding that does not change over time than one that used to have great roadholding.
The FD is superb but its performance is simply out of my league (0-'losing your license' in under six seconds), I found it totally unsuitable for daily driving in the busy western part of The Netherlands (a bit like using a race horse for drawing a carriage) and is just too expensive to keep as a hobby car.
Besides, I am a faithful kind of guy, also when it comes to cars, something does not have to be perfect to be perfect for me.

My own Rx-7 is a Stardust Blue first generation model SDX with optional factory sunroof, built in september 1981.
The 1982 SDX version came equipped with 13in alloy 'rotary' wheels, a rear spoiler, power windows, power door mirrors and a rear wiper but without airconditioning (which was optional) and without power-steering.
A few things that are non-standard on my Rx-7: 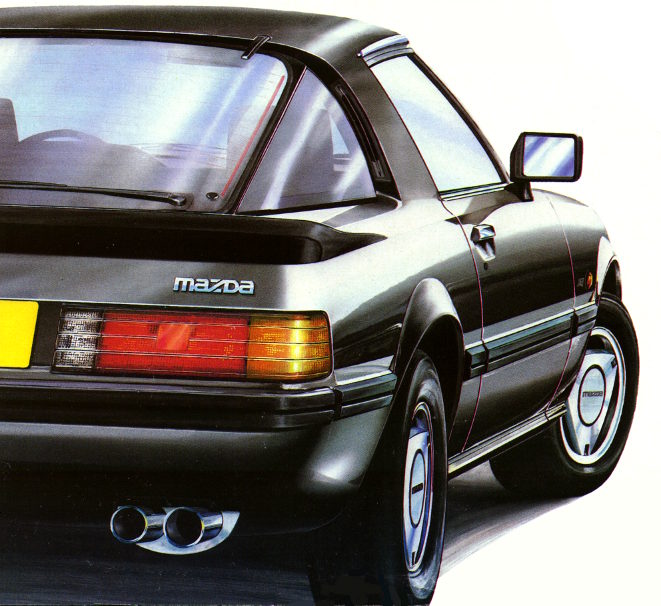