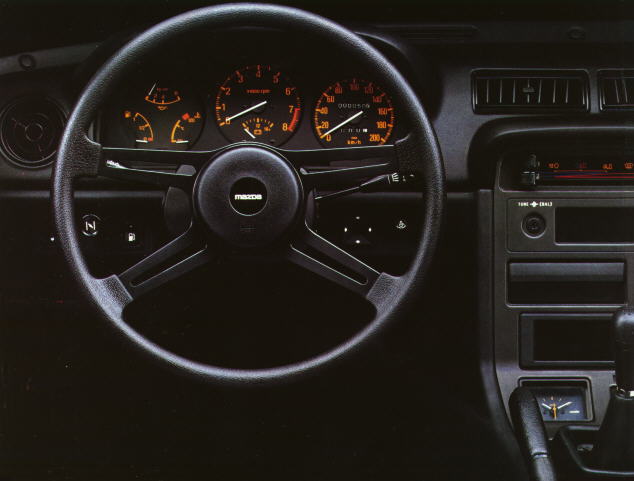 Its rotary engine makes driving an Rx-7 something special. The engine note is way different from that of ordinary piston engines, but also the engine characteristics differ. A rotary engine performs best at high revs. Pulling low revs in 4th or 5th gear causes excessive engine wear whilst fuel consumption is no (or at best only marginally) better than when driving at 3000 to 4000 rpm in a lower gear.
The speed range (in km/h) for each gear in an Rx-7 FB (P815/P130) is:

4000 rpm, the 'magic number' not only determines the cruising speed in each of the gears but is also the point where the second stage of the carburettor joins in. Cruising speed in 5th gear is no less than 138km/h ("yes officer, I was speeding, but got great fuel economy doing so..."

)
These figures also show that the proper gear for 80km/h is 3rd and certainly not 5th !

It takes some time before the engine, and in particular the engine oil, reaches operating temperatures after which the full rev range can be used safely. Take it easy the first 15 or so kilometers of a trip (i.e. keep the revs between 2000 and 3500), once the engine has properly warmed up you can safely let the revs climb to 8000 (or even more, depending on the exact type of rotary and its state of maintenance. My completely stock Rx-7 will run the dials of both speedo and rev counter off the scale in 4th gear without it causing problems).
First generation Rx-7 were fitted with twin two-stage carburettors, the second stage of which joins in around 4000 rpm (controlled by intake plenum vacuum).
Pick driving speed and gear so that the revs are just below 4000 rpm and you are rewarded with surprisingly fast acceleration.
Later generations RX-7 also have equipment (DEI, twin scroll turbo's, twin turbo's) that sharpens engine response and acceleration above 4000 rpm. A rule of thumb for any RX-7: keep the revs between 3000 and 4000 rpm for best economy, over 4000 rpm for really fast driving.

First generation Rx-7 roadholding is neutral, with slight understeer at the limit. Any understeer can easily be cancelled out, or even changed to oversteer, by applying a bit more throttle.
The 2nd and 3rd generation RX-7 each has a complicated rear axle assembly that adjusts toe of each of the rear wheels by several degrees to increase stability, making these RX-7s feel like they are running on rails (if properly maintained).

back to Erix7 home page